RADHIKA IYER is an Indian author, violinist, songwriter, session musician and record producer. She writes and produces music released as solo productions under her name and also records for other producers.

Radhika is a proponent of both Indian classical and Western contemporary styles. With an established Indian classical music background, her solo productions exude an extraordinary reification of new aesthetic standards in contemporary music. Elegantly combining eclectic Indian scales and articulations in her compositions, her style embodies a very progressive and novel sounding musical landscape.

Radhika is an exemplary when it comes to the aspiring young musicians of today who juggle with the challenges of pursuing  an academic career and music. Radhika holds an MBA in Business Strategy, is a Certified Public Accountant, shoulders a full time job in an MNC and yet, finds time to vigorously pursue her passion for music.

Radhika plays an unconventional custom made instrument – A 7-string electric violin, tuned to Western standard tuning. The instrument gives her enormous ability to pull off a Metal riff on it, or a beautiful Bach prelude or the impregnable gamakas unique to Indian classical music.

A book that helps  Western musicians delve into the mechanics of Indian music within the realm of Western Theory and notation.  Beautifully composed etudes for piano and classical guitar  that would remind you of Bach, but within a whole new sound spectrum of scales from the Indian Melodic System of music.

If you are an avid sheet music reader, these seemingly simple, short  2-page compositions will take your reading  and musical awareness  to a whole new level.

.THE VOYAGE (EP) – by Radhika Iyer  released in June 2017 by NARKED RECORDS . The Voyage is a truly multi genre album but one that is knit together by Radhika Iyer through her contemporized approach to infusing Indian textures into each genre with unheard of novelty.  Check out the reviews below !                     https://narked.com/album/the-voyage/ 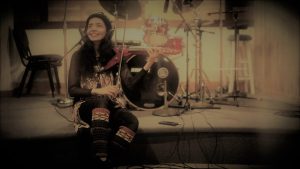 Radhika is an awesome musician!… Great work on the album!! Love Phrygian Fire video and song!! My favorite textures. Heavy rhythm and middle eastern melodies…..and a Viper!!!  Love the band… Everyone must check this out. Outstanding!  – Mark Wood, Emmy-winning composer &  Founder of Wood Violins www.Markwoodmusic.com

Radhika Iyer is an extraordinary musician.  Her work on the electric 7-string violin is captivating and worthy of the ‘virtuoso’ designation. Her compositions draw richly from  Western and Eastern musical styles while adding her own unique contemporary touch.  Radhika’s  cd is a ground breaking and remarkable listening experience.  I recommend it highly. – William Bay, CEO Mel Bay Inc.   www.Melbay.com

THE VOYAGE is the debut album of California based composer and violinist, RADHIKA IYER. With a fusion of Progressive Rock and Contemporary Jazz, the music on the album introduces Radhika as a modern string player performing her music on a fretted 7-string electric violin creating new soundscapes with her revolutionary musical concepts.- Arun Shenoy (GRAMMY nominated producer, arranger and founder of Narked Records) – www.Narked.com

I’m really enjoying Radhika Iyer’s take on jazz rock. Her newest single PHRYGIAN FIRE features non-typical time signatures and a hard hitting sound more in line with progressive rock rather than what you would expect from a jazz violinist. Definitely check out her new album THE VOYAGE if you are in the mood for something exciting and different.  – Matthew Shell (GRAMMY.com featured producer, engineer and founder of MTS Music Productions) – www.MTSmusic.net

Radhika Iyer is pure genius. “The Voyage” is an innovative creation and spectacular blend of classical Indian technique perfectly melded with the edge of western Jazz and Rock.  I loved it!- Jason Everett aka Mister E ~ World Jazz Bassist, Composer, and Producer,  www.Misteremachine.com

‘The Voyage’ is truly a musical journey. Radhika’s sense of melody and rhythm is beautifully dazzling in this album. The track ‘Durga’ is an extravaganza melding the vibe of the Dixie Dregs with Mclaughlin’s Shakti   – Trey Gunn, King Crimson www.treygunn.com

Radhika’s performance on her solo album The Voyage shows her fusion-tinged playing and compositional skills to be second to none. She plays her Viper electric violin in a variety of styles that reflect her many influences: Indian classical, Mahavishnu Orchestra-style fusion, rock/metal riffing; improvisational modern jazz, and even a hint of country. In the first tune “Reminiscentia”, you’ll hear some great, fluid playing but also structure beneath her soloing. I toured and played with Jean-Luc in the Mahavishnu Orchestra, 1974-75. There are a few moments that if you told me it was Jean-Luc Ponty, I’d have believed it. –  Phil Hirschi (cellist, Mahavishnu Orchestra). https://www.facebook.com/phirschi1

The Voyage” is a step into the modern era that will leave a giant footprint for those who follow. Radhika Iyer has out done herself by composing, arranging and producing such an artistic endeavor. From the title track, a rhythmic scape, that breathes and moves cinematically, with a quasi cuban-jazz/Coltrane flavoring – To the deliberant, maniacal march of Phrygian Fire, blasting with a guitar driven aggression and pushing the boundaries of scale and mood – This will be a landmark in this young lady’s early career and a milestone to the independent music scene. So do yourself a favor and put on some headphones or crank up the stereo and bear witness to music being flexed to its maximum capacity, with thought, taste and phenomenal talent.  – Tate Phillips (Owner, Producer, Engineer- Red Radio Productions Recording Studio and Record Label) www.redradioproductions.com

Music is a Lifelong Discovery